The story of the small craftsman, who started cutting marble in his garage and who discovers himself on the top of the European market 50 years later, sounds like a fairy tale. In the meantime, his sons have taken over the management of the company, that seems to be only at the beginning of its expansion.

This is not a dream, but a true story, which happened in the Northeast of Italy.  The story of  a man who, in the 1960s, followed up every possibilities offered by the market, and it leads us past the economic boom in 1994, when the favourable exchange rate of the German Mark opened the door to the German market, up to the present day.  Several investments and innovations, made every two years, led us to the year 2016 and to the present company with its new and modern office building -  despite numerous difficulties!

“Our company was founded in a way that would not be possible today. We, Antolini, Cereser and many other companies had been extremely lucky to be at the right time in the right place. Many times, a mere intuition guided our undertakings, because the investments for the fulfilment of our dreams, back then, were much smaller than those required now by the economic market.  Today, you could not found a company without a major capital, let alone start up a small craftsman business hoping that it will become something big.  This kind of business formation  is a thing of the past.”

However, we could not ignore our important anniversary, therefore we decided to celebrate this year properly: now, let’s commemorate the long path of our company,  the tough times in the past, our precursor with his and our visions of the future, our luck, our loyal customers, our faithful suppliers, ourselves and all the people, who always believed in us and who will still believe in us for the next 50 years!

Certainly, we will always remember Friday the 30th September 2016. But we really hope that our guests will also remember this evening, when we celebrated all together. It would be too trivial to describe the evening as unforgettable!

During that night we felt only warmth, friendship and the desire to celebrate together with Marmi Rossi, it was not about business, but simply about sharing that wonderful and important moment with us. All together in a peaceful atmosphere, “almost like home”, with lots of fun and delight, with shows… everything went as it should!

In hindsight, some things could have been done better, since we would like to be perfect, although we are, obviously, not. Deep down in our hearts we know, that we’ve done our best and we had the impression, that our efforts have been recognised: we felt your appreciation in your applause for the fireworks, in your sympathy for the touching speech of Giovanni and on the dance floor, where a lot of people danced until dawn!

There is only one thing left to say at this point: THANK YOU!

"Thank you for your presence, thank you that you shared dinner, beverage, laughs, words, tears, applause and dances with us! Thank you for sharing our style and our mission: every business as every event must satisfy both parts - always."

We are looking forward to meeting you again at the 100th anniversary of Marmi Rossi! ;-) 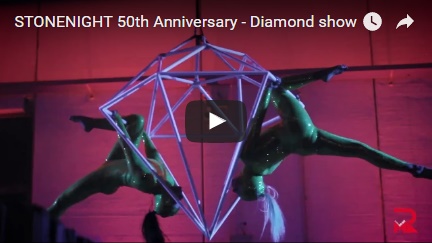