What originated the great art work of Serafino Rudari, that has been created during the Stone Night?

The actual idea was to celebrate our 50th anniversary with dignity, hiring an artist who would symbolically paint, not on canvas but on a granite slab, the universe of Marmi Rossi or, more explicitly, the universe of man power, because that is what makes our company:  suppliers, customers and staff, all embodied in a huge puzzle.

Therefore we contacted Serafino Rudari, whom we have known for a long time, since we’ve followed his artistic evolution while he’s created art work all over the world.

We never expected, that he had already performed on a Plexiglas slab in the past and that, after his performance, the slab had been cut into pieces, individually packed and offered to the guests as a gift.

However, a granite slab has nothing to hide from a Plexiglas slab! Well, we had now the right idea: hundreds of puzzle pieces.  The Marmi Rossi puzzle. Just in that moment, I looked in Valeria’s eyes  and we understood immediately, that we shared the same, insane idea: Rudari would paint on the granite slab, then the slab would be cut, stamped with our company logo and given to our guests during the Stone Night 2016, in an elegant gift box and in memory of the 50th anniversary!

Which technical problems have there been in realising this art work…

Unfortunately, granite is not Plexiglas, it is much harder to manage. We couldn’t help but to accept and to master the technical challenge – it was unthinkable, that Marmi Rossi would back off!

At this point, we would like to emphasize, that the artist Rudari paints with musical accompaniment, he would therefore use the granite slab as a drum, that means he would beat the paintbrush to the rhythm of the music, a very important part of his art.

It would be impossible to cut the slab the same evening, due to the lack of time and to several logistic problems. So we decided to cut the slab previously, to recombine all the pieces into a complete slab, that, after the painting, would be split into pieces again. First, we had the idea of putting stickers on the tiles, in memory of the 50th anniversary, but we quickly discarded that. At the end, we decided to engrave our company logo on each tile.

The problem, however, was as follows: when we began organising the event, we calculated  400 to 500 guests, which meant to cut and finish just as many tiles, which had to be fixed afterwards on some kind of still unknown support. And this was merely the beginning! 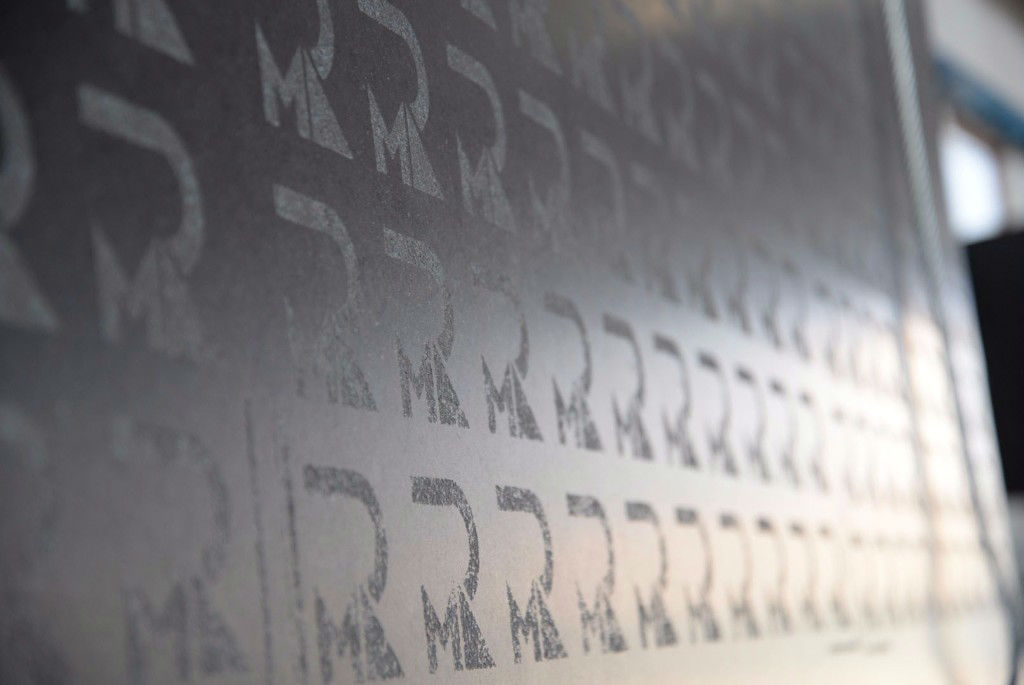 After the art performance of Serafino Rudari, more than 400 tiles should be detached from the support, packed in gift boxes, as fast as possible, and then distributed among the guests before the end of dinner.

Under these conditions, we immediately got to work.

After we had calculated the number of pieces, it was apparent that we needed 10 cm long tiles.

A slab with the dimension of  3,30 x 1,60 m was cut from a Nero Zimbabwe block in the sawmill and then polished in the workshop. According to the instructions of the artist, the slab was honed on one side and satined on the other. Subsequently, our long-term partner, the company Peroni, engraved 420 times the logo of Marmi Rossi on the granite with a high-tech sandblasting machine! 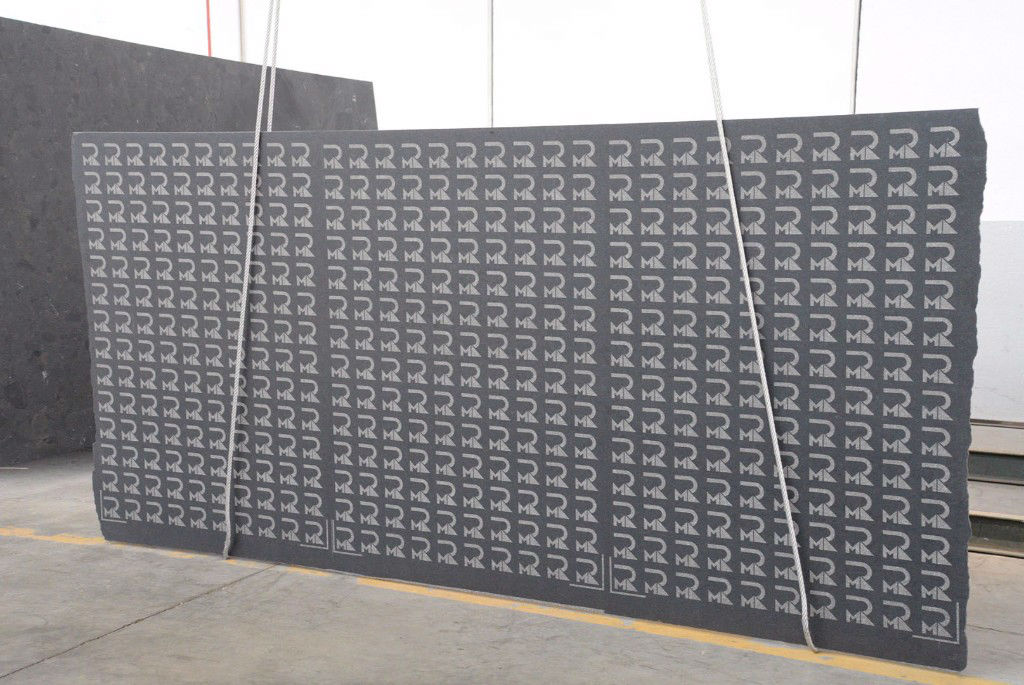 In the meantime, the metal working company Frenz produced a support, where all the granite puzzle pieces could be fixed effortlessly. At the same time,  that fixing would have to bear the rhythm of the artist, but nevertheless be easily and safely removable.

At the same time the creative of the Mase Press have helped us with the gift box, which we wanted to be captivating by form and design, but easy to be refilled and closed, since we would not have much time during the evening.

When the slab with the company’s logo returned, we cut it into 420 pieces;  afterwards each tile was dried. Then, we put them together, bit by bit, to form a whole figure.

Finally, we had some kind of metal tank produced, that had the dimensions of  3 x 1,5 m and an equal high edge as the slab. On it we fixed, piece by piece, the 420 tiles with infinite patience:  14 rows with each  30 tiles, only separated by a thin metal foil to allow an even weight distribution.  Obviously, we had to put bits of self-adhesive foil on each tile before we could attach them: we spent three days with cutting and gluing.

The finished slab was placed in consultation with the artist, so that, whilst drumming, the paint brush would produce the best possible sound.

During the aperitif, the artist performed the Action Painting, accompanied by two skilled musicians, a guitarist and a bass player.

During the evening and after the performance, a team of adolescents, consisting of Francesca, Andrea B., Andrea C., Marco, Matteo and Mattia, removed quickly the tiles and packed them into the gift boxes.

Then the gifts were distributed among the guests, so that everybody could get the feeling of being a part of the Marmi Rossi puzzle.