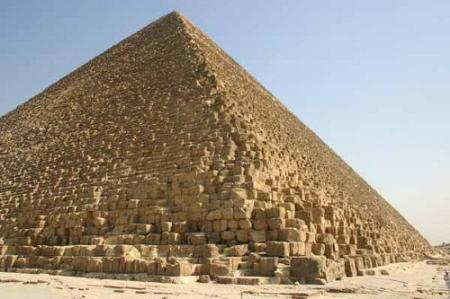 A HEART OF GRANITE: THE PYRAMIDS

Hardness and resistance, these properties ensured that granite became the preferred construction material in the Ancient Time.

Despite all problems in the course of quarrying the Egyptians learned rapidly how to quarry granite and how to use it to build temples and obelisks, even how to manage the transport for long distances. The granite was transported along the river Nile. The biggest quarries were located in Assuan and in the South of the country.

The Egyptian granite came to fame because of its coloration: rose, dark red (granite from Assuan), grey and black.

In Ancient Egypt ritual vases, statues and monuments were made of granite. In the local quarries granite was exploited to build religious and profane buildings: Syenite. Later on Syenite was used for tomb slabs, but only since the II dynasty (2.600 BC).

The pyramids of Khafre and Menkaure and the royal chamber tomb in the pyramid of Cheope, were externally faced with granite slabs. But not only: also the Djed – the interior of the Big Pyramid of Giza – was entirely built of heavy granite monoliths. Each monolith weighs nearly hundred tons.
In the complex of Dahshur are also located the Red Pyramid, so called because of its red colour facing and the Black Pyramid, which is made of black basalt.

Tomb statues and statues of deities were mainly produced with the red and black granite of Assuan.

One of the most important element in Egyptian architecture was the granite obelisk: the Egyptians believed that God Ra would live inside the building structure. Rome is the European city whith the best-preserved obelisks (18). Nine of those obelisks were taken during the expeditions of conquest in the Imperial Era from the land of Pharaohs and transported from Egypt to Italy: