It’s only fair to say that the Carrara Marble is not just any marble, but it is the epitome of  "THE” marble. The most famous sculptors have worked with this material, and, after all, the lighter type is not for nothing called Statuario.  As many entrance halls of high rise buildings in America and in the whole world,  the lobby of the World Trade Center was covered with white Carrara Marble, too. Just as well as the marble atrium of the new World Trade Center in 432 Park Avenue, which is, by the way, the highest residential skyscraper of the world.

The Carrara Marble, as other types of marble,  is a metamorphic rock made from microscopically small calcium carbonate crystals. This rock was formed by metamorphosis, that means that the former rock has got a complete new crystalline structure due to high pressure and/or variations in temperature, so, ultimately, the rock has been fundamentally changed. In the particular case of Carrara Marble you can say that the original rock was similar to the present lime soil of the big coral reefs in the tropical oceans. The transformation took place during the Early Jurassic (190 million years ago), when big parts of today’s North Tuscany were flooded; lime sediment deposited on the sea bottom and then formed a carboniferous platform.

After the movement of the earth’s crust, when the Apennines had been formed, the carboniferous platform surfaced from the ocean and formed mountains, which maintained their original characteristics; but it was not the same for the Apuan Alps, where high pressure has fundamentally changed the crystalline structure of the rock.  The lime turned therefore into marble. From the  carboniferous platform, which had been folded several times as ‚plastic‘ by very high pressure, arose the complex  geological structure of the today’s Apuan Alps.

The white Carrara Marble is characteristically homogenous, with a white to grey ground colour, shining grains and smoky grey veins, which run through the stone rather unregularly.  The different quality of this stone depends on  its ground colour; basically, we distinguish between these two marble types: Bianco di Carrara C (lighter ground colour) and Bianco di Carrara CD (darker ground colour). This material brightens gradually, when the marble is losing the water that is stored in its pores.

The different ground colours and veins of the marble in the area of Carrara make this material spectacular. If the ground colour is light, the Carrara marble seems to be all white; a marble with grey veins or little veins is called Statuario, it’s the one famous marble used by Michelangelo or Canova that makes only about 5% of the stone mining.  If the ground tone is ivory-coloured and if there are well visible veins as stripes in shades of grey to yellow or rather green, then it is called Calacatta.

We talk about Arabesque – marble if the veins have got netlike form and structure, in Italian: ‘Marmi Arabescati’, this name is due to the marble’s surface decoration that reminds of the Arabian art. If the ground colour is dark grey or in some spots nearly blue, the marble is called Bardiglio.

The Carrara Marble is mainly used for stairs, but it‘s also suitable for kitchen tops and working surfaces or covering and is as well used in tomb stone art.

Besides, the white Carrara Marble serves for food storage. Bowls are made of marble and rubbed with garlic. Then slices of bacon are put in and spiced up with several spices (pepper, cinnamon, clove, coriander, sage and rosemary). In this way one obtains the famous bacon lardo di Colonnata. If you grind spices as basil, garlic and pine nuts in a mortar made of Carrara marble, you’ll get the famous Genovese Pesto Sauce. 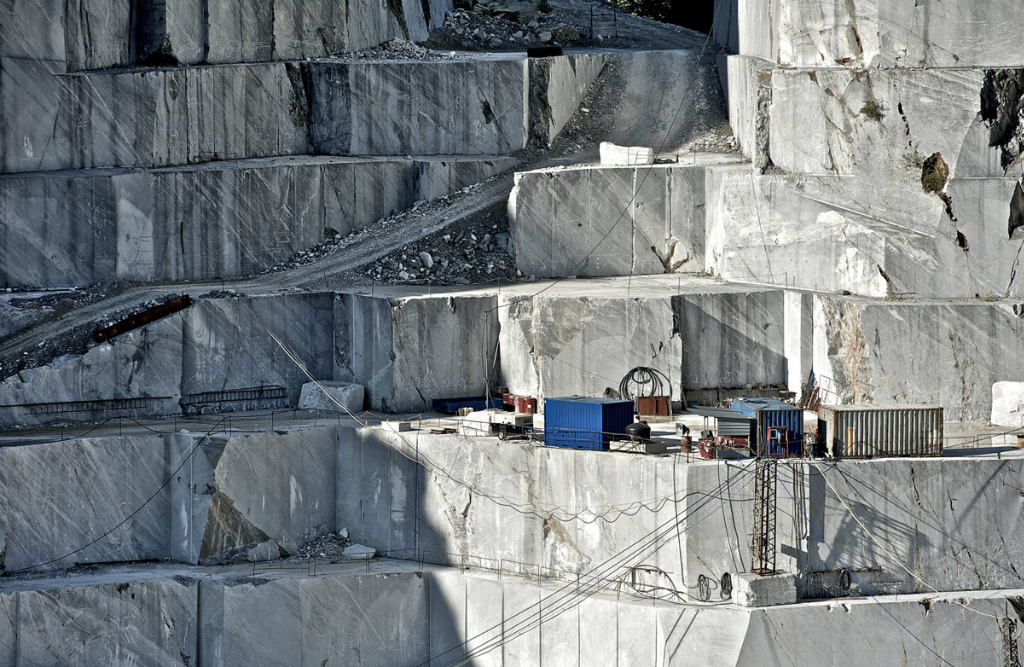 Even the Ancient Romans often used marble and you can still see their quarries nowadays. They transported  marble overseas from the port in Luni, that’s why this marble is called Pietra di Luni.

In Medieval Times especially architects ensured that marble from the surroundings of Como would be used for buildings in North and Middle Italy, particularly to build cathedrals. During the Renaissance Michelangelo chose the blocks for his sculptures personally in the quarries.

The white Carrara Marble has still a prestigious reputation. Its lasting beauty and timeless elegance is evidenced by the architecture and sculptures of the last two thousand years.