FROM A JOURNAL PUBLISHED IN 1900 OWNED BY THE COMPANY

Marble and Verona have been paired for centuries and even for thousands of years. We are speaking about marble, because every lime stone that can be polished, is generally called ‘marble’ by the stonemasons.

Geologists are stricter and use the term marble only to refer to a metamorphosed lime stone, after a physical-chemical transformation due to high temperature and/or high pressure took place, e.g. Bianco Carrara. Red ammonites didn’t result from metamorphosis, so basically, it is not a marble, but nevertheless… If we talk about marble and Verona, one may immediately think of the Rosso Verona, which characterizes many monuments from ancient times to this day.

Prehistoric remains, which have been found in Lessinia and on the Mount Baldo,  prove that more than five thousand years ago, Stone Age men sculpted small statues from stone, probably as burial objects. The traditional finishing of stone came from far away and has been handed down until today, the Arena in Verona and several beautiful churches and monuments in the city confirm that. Today, we cannot speak about a particular stone, since marble, granite and natural stone from all over the world are finished in the region of Verona.

The Stone Age men slowly improved their skills to chisel anthropomorphic figures with rude tools, but nowadays, real progresses have been achieved by advanced technological methods.

A thread runs through the geological genesis of these mountains and connect the millennium old traditions with the present-day innovations: it’s like a red thread, as red as the Veronese stone.

Whether we talk about the famous Rosso Verona or about the natural stone from Lessinia, the colour red always predominates, with a colour range from light pink to red, even though the colour will fade a little over time. The stone industry is still very important for the Veronese economy, especially in the three regions, where natural stone is quarried: in Caprino-Valpolicella, in Prun and Lessinia as well as in the area of Valpantena.

The genesis of Rosso Verona

Generally, the genesis of the three regions had been similar and more than 130 millions of years ago (year more year less) a large sea covered these areas. Ammonites, shells and other animals were deposited and decomposed in the muddy sea bottom, while the wave motion continued to deposit and pile up smaller and bigger nodules of calcium carbonate. In the encrusted seaweed more sediments were deposited and new nodules were built.

The presence of iron and manganese ensured the red colouration and additionally, red clay settled between the stratums. The movements of the earth crust and the huge number of geological phenomena hardened the sea bottom and pushed it upwards, and within 25 millions of years, real mountains were built.

The marble quarries in the region of Verona 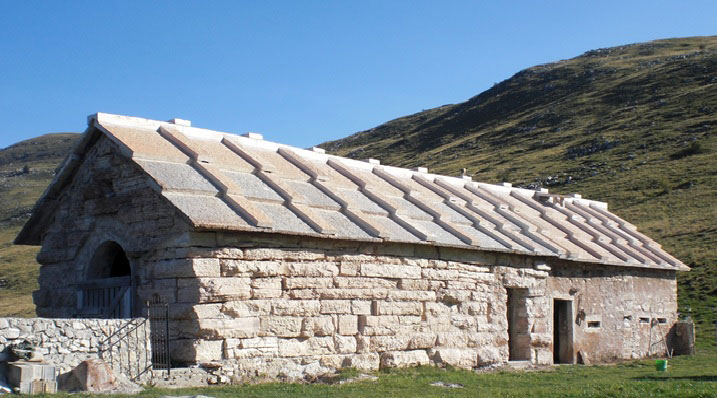 We don’t want to bore you with technical details, but it’s important to know, that the quarries are located in a height of 300 to 1000 metres. The highest stone quarry is located in Lessinia (from a geological point of view it‘s the youngest stone) where layers of different thick rock slabs and not entire stone blocks  are mined. Natural stone of  Lessinia is also called Prun, which was the name of one of the first quarry. Today, the most profitable quarries are located on mount Loffa, where manual workmanship is still in harmony with the territory. The companies in Lessinia work only with the natural stone that is quarried in that territory.

Depending on the different layers, this material is used in the building industry for flooring or roof tiling. From a historical point of view, the region of Caprino-Valpolicella is well-known, since quarries and workshops have been there for over two thousand years.

Since the times of the ancient Romans, precious marble has been extracted in this region, while the mining techniques have been developed by and by, as attest numerous monuments as well as the Arena in Verona. In the years that followed, the marble of Sant'Ambrogio was used by famous sculptors such as: Maestro Nicolò, Benedetto Antelami in Parma and other artists from the Romanesque period. Artworks in the Basilica San Petronio in Bologna were made of this natural stone by Jacopo della Quercia. The region of Verona became famous for stone cutting and thus offered the inhabitants a secured employment as stone carvers, stone workers or sculptors. Furthermore, the natural stone could easily be transported by the river Adige to the surrounding cities and regions.

Marble and natural stone on the Veronese market

Around 1800, the stone cutting industry became very important for the Veronese economy. From the second half of the 19th century, the region of Verona reduced the mining of natural stone specialising instead in marble finishing. Competence and skilled technology transformed the region of Valpantena and Valpolicella into a stone cutting centre where the present stone cutters are able  to cut, polish and finish any natural stone, marble or granite from all over the world. The finished products are finally exported to decorate buildings and sky scrapers all over the globe.

It is no coincidence that 25-30 % of the national export of finished or semi-finished stone originate from the Veronese region. This success is also due to a small exhibition in Sant’Ambrogio di Valpolicella that took first place in 1965. In little time, the exhibition became one of the most important and biggest trade fairs of the world. We refer to Marmomacc, which takes place every year in Verona at the end of September.

The skills and experience of the stone industry, as well as the capacity to keep up with the latest trends, all of this is reflected in the new office building: a ventilated façade of granite slabs covers the building walls and once again, natural stone dominates the furnishing of the interior spaces.