Regarding the EXPO 2015 we’ve already talked about marble, but, obviously, there’s plenty more to tell... 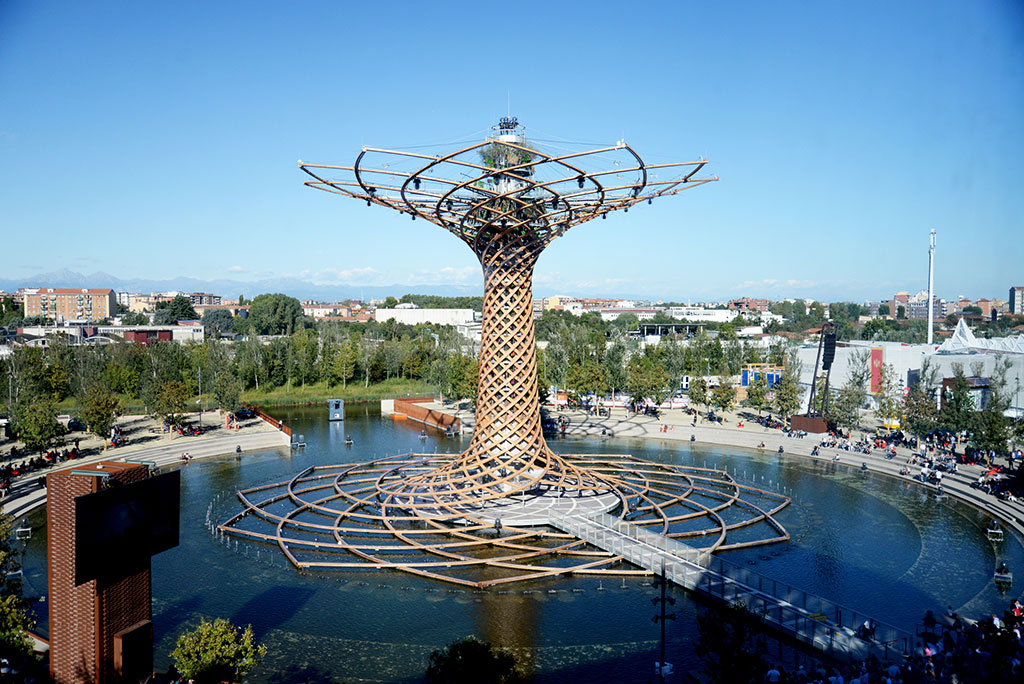 A big attraction of this exhibition is the tree of life, a 37 metres high structure made of iron and wood, the golden mean between a monument, a building and an art work.
The inventor Marco Balich took his cue from the most intensive Italian art epoch: from the Renaissance. Late in the thirties of the sixteenth century, Michelangelo restored at the pope’s bidding Piazza del Campidoglio,  while doing so he gave the square a new form and plastered the gravel surface. The artist invented a sophisticated and symbolic structure for  the pavement, based on a complicated drawing which  started with a rhombus and culminated in a twelve jagged star referring to the star constellation.

The tree of life develops its own idea of natural energy in three dimensions, merely the strength in its earliest and very symbolic form.
The foundation reflects however the double dimension and the drawing of Michelangelo.
All in all, the basis of the tree of life consists of  a wide circle of 380 square metres. In order to reproduce the typical light and dark contrasts of Michelangelo, the rhombus that illustrates the twelve jagged stars is made of Botticino marble, whereas the dark parts of the pavement are made of porphyry Vallecamonica.

The play of chiaroscuro contrast can be also discovered on the walkway, which leads over the water of Lake Arena towards the structure: the decoration with square patterns is made of porphyry, whereas the external arc is made of Botticino.
All in all, 100 tons of natural stone has been used for building, that is more porphyry (ca. 60%) than Botticino.
After the constructions had been completed,  both types of natural stone were treated with stain  protector in order to protect the surface from dirt and preserve the natural beauty of the stone permanently.

One of the good things of the original project is, that the use of these materials was not on the agenda, as foreign products  were meant to be used.  For the realisation of this project, the cooperative “Orgoglio Brescia” (pride of Brescia) insisted on material from Brescia or Italy.
The marble Botticino is a light calcareous stone with beautiful beige veins. This stone is quarried in East Brescia, close to the location Botticino, hence its name.  The stone has already been known in the ancient times. Regarding exploitation and quantity, the quarry is the second most important quarry in Italy, only the quarries of Carrara are more reliant. Botticino, when used as pavement, is bush-hammered, that means  mechanical treatment where several chisels beat the stone’s surface to create a rough and anti-slip surface.

In the foundation and on the walkway of the tree of life we can find another material: porphyry Val Camonica, we’ve already talked about it (read the article "Porphyry Valcamonica").
The quarries of this  precious natural stone are located in the Camonica Valley close to Pass Crocedomini, in Cividate Camuno, at a height of ca. 2000 metres.  The huge  porphyry blocks of these quarries with their characteristic purple and brown colour suit really well for this kind of processing.

For the building of the tree of life 4 cm thick slabs were cut from 4 or 5 blocks and then flamed in order to roughen the stone and to obtain an anti – slippery surface. The slabs were reworked into tiles according to the guideline and then cut for the rhombus design.

We are really proud to say that we have the same porphyry in our deposit, which has been used at the EXPO 2015, it comes from the same quarry and from the same stone workers: a unique and exclusive material.
And if the Expo uses the same natural stone that Marmi Rossi sells… thus can only bode well!