Given the lines, patterns and stripes on marble and granite surfaces, we are often asked: “Is this a fossil?”. From a geological point of view, this is impossible if you are looking at a marble or granite slab. Actually, if you are in front of a fossil, the material can neither be marble nor granite.

There are other natural stones (often referred to as 'marble‘) that contain fossils of organic or animal origin. There are also some granites with decorative details that by all accounts, look like fossils.

The exciting origin of natural stone and marble with fossils

Imagine a tropical lagoon, but not the one that some lucky globetrotter may enjoy in an exotic country: imagine a lagoon as it looked like about ten million years ago. Think about a lagoon full of fish, plants, algae and shells. You may even imagine a coral reef.

See in your mind’s eyes the life cycles of these living beings, as they swim, eat, reproduce and ultimately die. They then sink dead to the sea floor where they are covered by sand and mud, that are constantly deposited by wave motion. 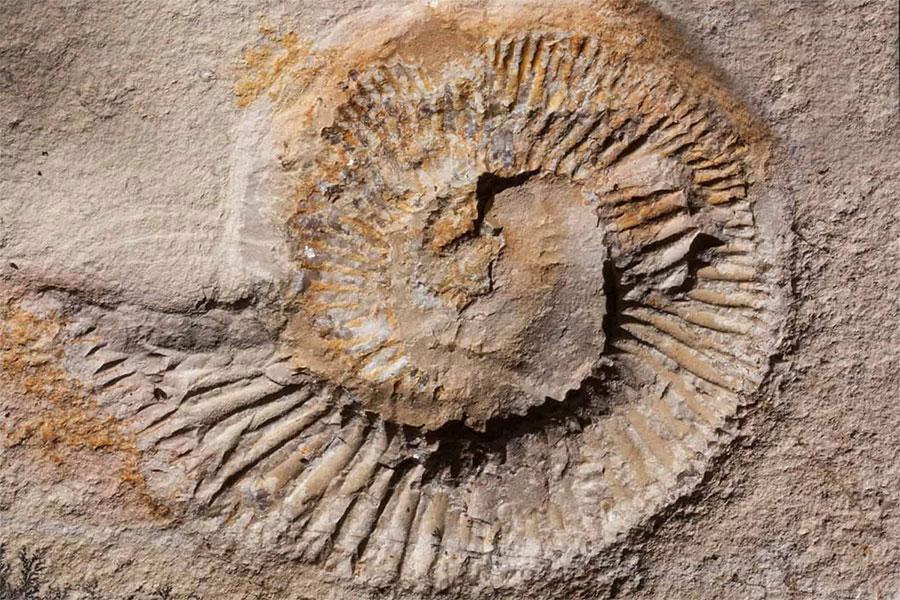 Imagine tremendous earthquakes… incredibly powerful and unprecedented earth movements. While the sea retreats, the mud is compressed and crushed by natural disasters, then it solidifies, trapping shells and shellfish skeletons.

In such conditions, millions of years pass by, when suddenly a being appears, rather insignificant for the geological history of earth, who cuts the sea floor that has meanwhile turned into rock, pushed up by movements of the earth’s crust. This insignificant being is called human and just now, we’ve briefly described the genesis of those natural stones and marbles with fossils, that adorn now palaces, houses and churches.

Marble with fossils… that is not marble

If you discover a fossil in a stone, it is actually not marble. In fact, marble doesn’t contain fossils, because it is created through chemical-physical transformation, so that the original form of the previously existing minerals can’t be recognized anymore.

In our warehouse, you can look at several natural stones, commonly referred to as “marble”, that contain visible fossils: extraordinary details that embellish and mystify flooring, paneling or table tops.

In our region, Rosso Verona is known for its amazing ammonite inclusions.

In our warehouse, the most noticeable stone is Pierre Blue, which is adorned with petrified water lilies, whereas Daino Imperiale from Sardinia  as well as the Spanish marbles Nero Marquina, Crema Luna and Crema Marfil often show profiles of seashells.

Even Travertine contains fossils in the shape of shells or leaves, although they are not clearly visible.

Get enchanted by the beauty and details of natural stone, especially when they are emphasized by our skilled surface finishing.

Granite with fossils… that are not fossils

Besides marble, there are several other materials with beautiful inclusions, so that we are often asked: “Are these fossils?”

No, they aren’t, if we’re talking about granite or similar materials, because granite doesn’t contain fossils for one simple reason: granite is originated from volcanic lava slowly cooled inside the earth’s crust.

Some details on granite may look like fossils, but have actually a different origin, albeit a natural one. Let’s take a closer look at some of these beautiful materials.

Brown Silk was so called because its surface resembles silk: a kind of soft blanket with many cloth folds. On the surface, one may picture silver shells that seem to produce spiral movements. But those are 'just‘ quartz knots that were engulfed by flowing lava before it cooled and solidified.

Have you ever seen Black Ice? On a graphite-black to black background, a series of engraved signs cross the surface in all directions, which not only looks beautiful but also mysterious. These “scratches” are not fossils, but all natural with a quite impressive effect.

Let’s talk more about black or almost black material: Black Grafite seems a dark sea, whose waves are crossed by a swarm of juvenile fish. When satined, Matrix enchants with a fascinating knot design.

A lot of granite types seem to contain fossils: Azul Noche, Coffee Brown, Donatello or Flake Brown. What appears to be fossils are actually nothing more than quartz knots or various minerals not completely fused.

Details that tell the story and nature of a material

Why are we talking about fossils, when the "marble" that contains fossils, is actually a sedimentary rock, while the fossils contained in granite are not at all fossils?

We are talking about these details (whether they are fossils or rather shapes or colours of other natural origin), because they confer beauty and fascination to the material’s surface,  while narrating the genesis of the natural stone we’ve chosen as pavement, panelling, kitchen top or vanity top for our home.

Natural products talk about nature, history and traditions. No synthetic material will ever be able to compete with natural stone.