Quartzite products are often confused with synthetic quartz products, after all they have similar names. Through which criteria one can distinguish quartz from quartzite?

Even though quartz and quartzite appear very similar, they are completely different types of material: quartz is a synthetic resin produced by human beings, whereas quartzite is a metamorphic rock formed through millenniums by chemical processes.

Both materials contain a high level of quartzite and are applied similarly, that’s what connects them.

In simple terms: quartzite is a natural product and unique as every natural stone,  it presents natural mineral inclusions, depending on the place and era of origin.

Quartz is a technical reproduction, it is thought to imitate quartzite, but also to guarantee the uniformity of large surfaces.

Millenniums separate the two materials, as well as the method of producing and the production duration.

Quartz slabs are produced in laboratories by mixing  quartz, dyes and resin.

In contrast, quartzite is a very hard metamorphic rock,  made of sandstone and mostly of quartz (mineral). To get an idea of how quartzite is formed, think of glass manufacturing.

Take sand and heat it at very high temperatures to such an extent that it melts into a semi-liquid mass, then put high pressure on the mass.  The movements of the earth’s crust and the different minerals give the natural stone all those various and unique colours and stripes.  Now, set the time alarm to just a few thousand years and  give the mass time for cooling… and voilà natural quartzite!

There are many types of quartzite, as the composition and colouring of a quartzite is determined by the quarry site. The colours range from a nearly transparent white to beige, from yellow to brown, from pink to red and from blue green to black.

We are talking about a natural stone with a high abrasion resistance and a general resistance against environmental impacts and acids, it’s also a material that withstands changes in temperature. Therefore, quartzite can be applied indoors as well as outdoors.

Synthetically produced quartz  is only applied indoors, because it’s not particularly scratch- and heat-resistant.

Surface finishing of quartzite is multifaceted: e.g. split processing or honing.  A polished surface gives any quartzite a special glow, as well as a satin-finished surface makes this natural stone shine. 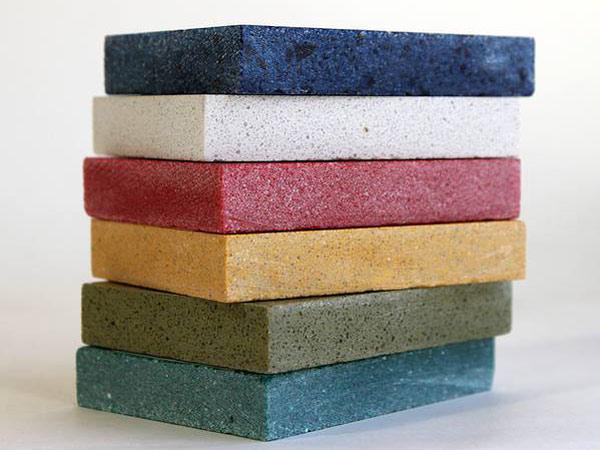 Quartz, however, offers a wide colour range, because any dye can be added during the production. Upon request, even artificial and unnatural colours are created.